Ken Lincoln joined the Royal Australian Navy Band at the start of 1977 and remained in the permanent Navy until 2003. He was the recipient of the John Stucas Memorial Award for the highest Navy qualifier on the Group Leader’s course and received an Australia Day award for his leadership of the Queensland Naval Band. Ken spent a total of 9 years at the Defence Force School of Music in Melbourne as an Aural and Woodwind Instructor and later as the Training Developer / Quality Controls Officer. Ken is a soloist and performer on several instruments including the Clarinet(s) Saxophone(s), Flute, Piano, Keyboard percussion, Bass Guitar and he also dabbles in playing instruments from the brass family along with composing and arranging music. He has had the good fortune and opportunity to play alongside wonderful musicians such as Don Burrows, James and John Morrison, Andy Firth, Ed Wilson, Paul Panichi, Jeff Jarvis and many others. Ken is currently an instrumental music educator with the State Education Dept, the Catholic Education Dept and is a former Saxophone and Clarinet teacher at the Anglican Church Grammar School (Churchie) in East Brisbane. He is the Music Director of the popular North Brisbane big band The New Groove Jazz Ensemble, a member of the Les Wilson Swing Force Big Band and performs regularly with Brisbane based jazz group Held To Ransom. Since departing the Royal Australian Navy in 2003, Ken has performed as an augementation member of the Brisbane Big Band and QLD Pops Orchestra on Clarinet, Alto Saxophone, Tenor Saxophone and Baritone Saxophones. 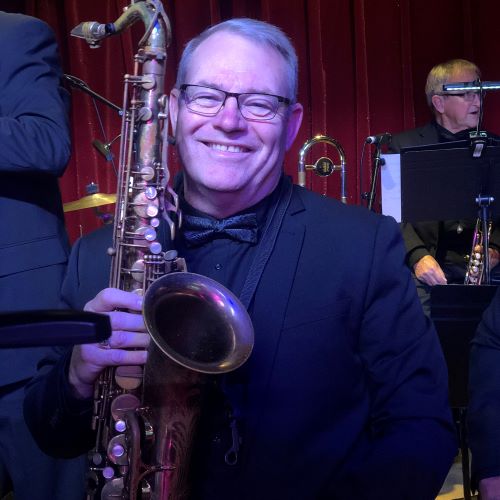